Showing posts from July, 2012
Show all

July 20, 2012
Yesterday, Aldygtha created a new Historic Tablet Weaving Facebook group, and it is already filling up with interesting discussions and beautiful photos of members' work.  If you like historical tablet weaving (and you don't hate Facebook!) you should join!
1 comment
Read more 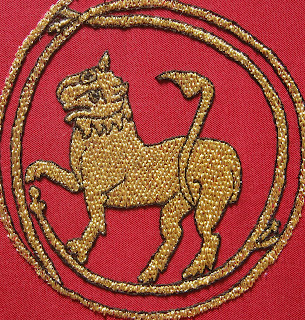 Well I reached the first milestone in my distracting embroidery, and managed to put it aside.  Got back to the weaving and managed to finish the first bicep band. Half way there!  Things were really going downhill near the end in terms of the integrity of the cards and the warp. So I've decided to re-string everything with new cards.  Woohoo.  That should keep me occupied far another week or so. Anyway, here's a picture of the embroidery  I've been working on.  It's going to be a buskin, based on the ones of Walter de Cantelupe .  The lion is from some manuscript I cunningly didn't write down the name of (Will have to trawl back through the University Library to find it again)
Post a Comment
Read more
More posts