Showing posts from November, 2010
Show all

A local, Aelfric Branwelather, offered to make me some wooden tablets at Canterbury Faire this year, and I've finally had a chance to try them out this month. The tablets are about 5cm square and 1.5mm thick. I had to finish sanding them myself, but they are working very well.
Post a Comment
Read more

Warp: Dark green and white wool (fibreholics) Weft: same as above (varying colour) Pattern: I made it up Cards: 15 Width: 8mm Length: ~60cm I had a band all strung up on my Oseberg loom that I had been using at String Day to demonstrate doubleface techniques. Most of it was still unused at the end of the day so I needed to find something to use it for. I'd recently been reading Silja Penna-Haverinen's article in NESAT X: Patterned Tablet-Woven Band - In Search of the 11th Century Textile Professional , in which she hypothesises that bands from medieval Finland employed 180-degree turns. Her article focuses on a band found in the Kirkkomäki burial ground in Turku, but she mentions that the Masku Humikkala band uses the same techniques, and I think that the Kaukola band in Hansen falls into the same category. According to the article, 180-degree turns occur in pairs on either side of a reversal, giving the appearance of a tighter corner. There is also mention of a 180-
3 comments
Read more 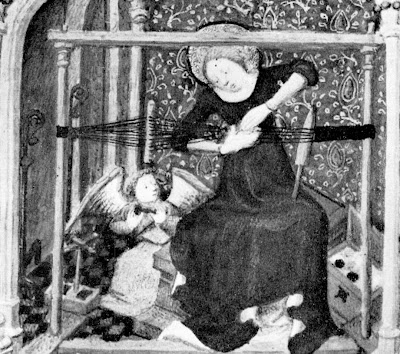 Lowrens has made me another warp spreader. The first one he made was in the style of Teffania's - a rod with hole drilled through it. This gels with what can be seen in the few manuscript pictures which show warp spreaders. There are about 7 manuscripts listed in EPAC (including the errata) which contain warp spreaders, out of a total of 33, so I suppose if there's one thing which can be concluded it is that use of the warp spreader is optional (possibly dependent on how prone the warp fibres are to tangling). Of those seven, I have managed to lay eyes on 4: Book of Hours Duke John of Bedford, ca 1420-1430. Vienna, Österreichisches NationalBibliothek, ms. 1855, fol 25 (at right) Book of Hours, ca. 1407 . Oxford, Bedleian Library, ms. Douce 144, fol 19 Book of Hours, Paris, ca. 1400-1410 , Hague, Koninklijke Bibliotheek KB 76 Fol 21 French tapestry in Rheims Cathedral, France, ca. 1507-1530 (below) There are apparently another couple in Des Cleres et Noble Femmes but the pi
1 comment
Read more
More posts