Showing posts from September, 2010
Show all

I've known since early on that a twill band will tend to spiral on itself when not under tension, and that the way to counteract this is to have a few cards going in the other direction. EPAC mentions it (p. 68), saying: Generally, at least two tablets at each edge are threaded in the opposite direction, or alternating S and S, to compensate for the twisting of the band which is inherent in this type of weave. I'm sure I read elsewhere that alternating at one end of the band only was sufficient but I can't find a reference for that now. That's what I did for the " scrolling vine " band which was my first foray into twill bands. I didn't have any problem with spiralling so it seemed that doing a SSSSSSSSSSSSZ weave was sufficient to avoid any problems in that area. However, the plain (no brocade) band I've just finished, which was threaded ZSSSSSSSSSSSSSSSSSZ, had quite an extreme twist on it. It turns out that the "reverse the edges" pl
Post a Comment
Read more 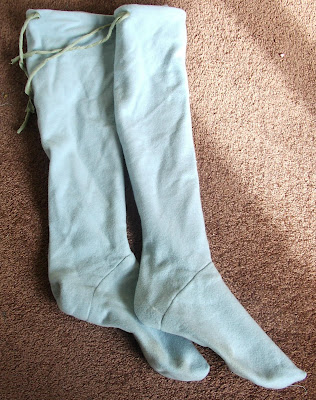 Warp: Green silk (colourmart) Weft: Green silk (colourmart) Pattern: card idling monochrome twill Cards: 17 Width: ~1cm Length: ~1m I decided a while ago that I wanted to have a go at the "simulated satin effect" band from Þóra Sharptooth's Three Tablet Weaving Recipes page. So I did- but it seems I did every imaginable thing wrong in the process! Here's a list: No loom: because I was taking this band travelling with me, I did it backstap style. This is the only band I have woven without two fixed tension points (whether it be 2 chairs, my Oseberg loom, or an inkle loom), excluding the tubular cord I did around Christmas. The tension of this band was all over the place Using a new type of silk: This was the first outing of the silk I got from colourmart . The silk from colourmart is great value and the customer service is very friendly, but this silk turned out to be a lot stickier than what I was used to (closer to how wool behaves) which didn't hel
Post a Comment
Read more

September 01, 2010
I don't know if this is common knowledge and I'm just out of the loop, but a friend recently pointed out to me that it was possible to get wonderfully high-resolution (specifically, 2500 pixels on the wider axis) photos of items from the V&A if you become a "member". It goes like this: Go to https://collections.vam.ac.uk Click the "Log in" button at top right. Fill out the "Or Register" form on the right-hand side of the page. You are now a member. Search for the item in the collection you fancy and click on the thumbnail of the one you like. At the right of the page, below the summary information, there is an "Order this image" button. Click it. You'll be taken to the "Manage your orders" which is kinda like your shopping cart. You can add up to 30 images to a single order. When you're done choosing the images you want, click the the "Place order now" button. The first time you do this you'll be aske
2 comments
Read more
More posts