Showing posts from March, 2012
Show all

Band from Chasuble of St Wolfgang 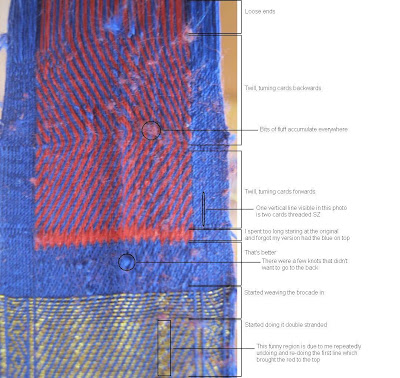 I have a new project.  It is the band on the Chasuble of St Wolfgang (or rather, one of them).  You may have seen the pattern in EPAC on page 120, or plate 179 in Collingwood.  There are photos of the original at Kopert -taken by someone who knows it's useful to show the part of the band where the brocade has worn away!  You can see Nancy's version here but it is not 3/1 broken twill The band is approximately 3cm wide, has over 120 tablets, and is woven in brocaded 3/1 broken twill.  This is the first time I am combining both techniques so it is a bit of an adventure.  To make things even more exciting, I am weaving it using very thin (120 denier) red and blue filament silk from Devere .  For the brocade I am using real gold thread I bought from John Marshall . I'll be weaving on my inkle loom because there's no way I'll be able to keep things neat otherwise. EPAC graphs the first figure from the band, the lion (or aardvark pushing a lion mask, as it appears
Post a Comment
Read more

Nancy Spies selling off her books

March 10, 2012
Nancy Spies posted the following message to SCA-Card-Weaving yesterday: "I don't mean to do a "business" message here, but I did want to let folks know that I am liquidating all remaining stock of "Anna Neuper's Modelbuch" and "Here Be Drolleries" by the end of April. "Here Be Wyverns" is now out-of-print, but copies of "Ecclesiastical Pomp" will still be available until sold out." Ecclesiastical Pomp and Circumstance is THE book for brocaded tablet weaving and Anna Neuper's Modelbuch is also a great little book.  Get in quick!
2 comments
Read more
More posts