Warp: Wool (fibreholics)
Weft: Wool (fibreholics)
Pattern: from Latviesu Jostas
Cards: 20 pattern + 2x3 border
Width: 1.5cm
Length: 55cm
This technique came up on the SCA-Card-Weaving list recently and I was inspired to give it a go.  The pattern is from Latviesu Jostas by Aleksandra Dzérvítis & Lilija Treimanis.  Wonder of wonders, this book was in the National Library of New Zealand (Finding a book I'm looking for domestically is a minor miracle).  The book is in Latvian and English.  Mostly it covers traditional patterns but it also has some 12th century patterns, although information from an archaeological perspective is lacking.  This one is described as "Stameriene, blue wrap".

The book is pretty emphatic about getting the colours to have the characteristic greenish tinge of local dyes.  I gave this a crack by overdying my blue, red and yellow wools with green dye.  It didn't really result in the right colours, but they are still quite striking together.

This technique is quite similar to that of the Swiss band I did recently.  Both feature a two-hole weave where the weft sometimes passes above both threads in a card to form a brocade.  This is the green in the pattern (with the exception of the green cards in the border).  The main difference is that this band has warp twining, although not as sharply as in a four-hole pattern.  Here's the back, where it's easier to see this effect.

If I was doing this again I'd make the green border tablet be on the outside, where it would mask the "blips" where the weft turns. 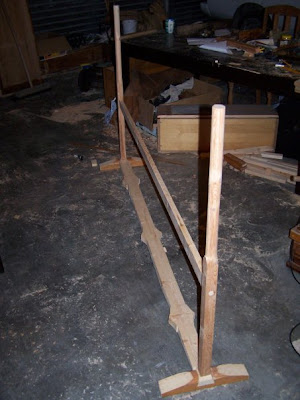 Here's the long-promised post about the Oseberg loom made for me by Iarnulf. Here's a link to Plate 13 from Osebergfunnet Vol. 2 with line drawings of the loom. Iarnulf has copied the dimensions closely. The wood is spruce and macrocarpa while the original was beech. The loom stands about a metre tall and is just under 2m in length. Here's a photo, taken before it was oiled.

It feels great to be weaving on a documentable loom. Because it breaks down into pieces it's also very convenient for taking to camping events. The goodly length means you can go for a long time without having to reverse your twine direction (As I've mentioned before, it does make it very inconvenient for setting up in the living room!).

If I had one complaint it would be that the crossbar is right where my knees want to be when sitting on my chest seat which means I can't have my lap directly below where I'm weaving so the bobbins can drop there when not in use. This could easily …
Read more 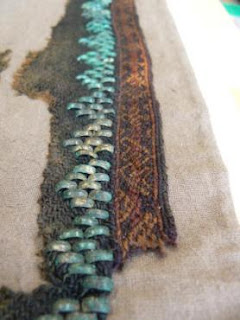 Update: I had the shawl incorrectly dated to the 11th century-it's a bit later than that!

Maikki Karisto and the Tallinn University Institute of History have given me permission to share some photos she took last year of a shawl from Siksälä and specifically its tablet woven border.

This shawl can be found in the Tallinn University Institute of History archaeological collection under the major number AI 5100.  It dates to around the 13th-14th century. The tablet weaving is about 1cm in width.  It is in Baltic two-hole technique, or Hochdorf technique, depending on how you look at it.

More information on the finds from Siksälä can be found in the book Siksälä, a community at the frontiers, Iron Age and Medieval by Silvia Laul & Heiki Valk.

This band is for Bjorn, in return for the replica Viking beater in the previous post, as well as a bone pickup stick and some antler bobbins which I will blog about shortly. It is very similar to the other Birka patterns I have done.

Bjorn supplied me with some 28 gauge sterling silver wire to use for the brocade, but I couldn't make it turn corners sharply enough. You can see my attempt to use it at left in the picture below. When that failed I turned to Devere's sterling silver metalic thread around a cotton core. It is very nice to work with, my favourite brocade thread so far. I used it double stranded.

Bjorn liked the band, originally intended for cuffs around his tunic, enough to commission more of the same- this time to go around the neck- in return for a chest, so I'm about to start on a second metre of it.